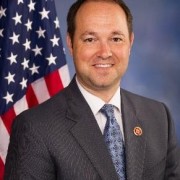 Marlin Stutzman is a fourth-generation farmer, business owner, and former U.S. Congressman from Howe, Indiana. Marlin and his wife, Christy, have two sons, Payton and Preston. Marlin is currently Chief Development Officer of WishBone Medical Inc. in Warsaw. Marlin and Christy are also co-owners of Stutzman Power Equipment in Middlebury and Ava Laurenne Bride, a bridal boutique in the historic district of Fredericksburg, Virginia. The Stutzmans continue to maintain their family farm, Schönbrook Farm & Inn, in Howe where they raise Wagyu Beef, Thoroughbred Horses, and Brittany Spaniels as well as opening their historic Victorian Style home as an Inn.

Marlin’s first experience in business was at the age of 16 when he started his own beef cattle operation. At the age of 18, he became a partner with his father Albert and family and built Stutzman Family Farms into a multi-million dollar operation. Growing seed corn, green beans, corn, soybeans, venturing into organic crop production, Marlin soon added a trucking company to the family operation to compliment the needs of their crop production.

At the age of 25, Marlin was elected to the Indiana State House, working as the youngest serving state legislator for several years while still working full-time on the farm. He helped Governor Mitch Daniels to take the state from a $1 billion deficit to more than a $1 billion surplus and a 10 year fully-funded roads program, without raising taxes. He was elected to the Indiana State Senate in 2008, representing a large portion of the counties in Northeast Indiana.

Elected to the US House of Representatives in November, 2010, U.S. Congressman Marlin Stutzman quickly emerged as a pro-business, pro-family, conservative leader for Northeast Indiana. As a member of the House Financial Services Committee with Chairman Jeb Henserling, the Budget Committee with Chairman Tom Price, and the Dean of Indiana’s Republican delegation in the House, Marlin worked hard to bring common sense to an out of control federal government. Congressman Stutzman was proud to serve the needs of the hardworking Hoosier families who call Indiana’s Third Congressional District home.

Marlin graduated from Lake Area Christian School in 1994 and attended Trine University where he studied Accounting and Business Management. The Stutzmans attend Northside Baptist Church in Elkhart and live in Middlebury. Marlin’s heart for mission work has led to short-term mission trips in Russia, Haiti, Mexico, and Guatemala. Marlin is a member of the LaGrange Chamber of Commerce, NFIB, ARC of Indiana, the Indiana Farm Bureau, the Howe Community Association, the NRA, and several Hoosier right-to-life organizations.

This site uses cookies. By continuing to browse the site, you are agreeing to our use of cookies.

We may request cookies to be set on your device. We use cookies to let us know when you visit our websites, how you interact with us, to enrich your user experience, and to customize your relationship with our website.

Click on the different category headings to find out more. You can also change some of your preferences. Note that blocking some types of cookies may impact your experience on our websites and the services we are able to offer.

These cookies are strictly necessary to provide you with services available through our website and to use some of its features.

Because these cookies are strictly necessary to deliver the website, refusing them will have impact how our site functions. You always can block or delete cookies by changing your browser settings and force blocking all cookies on this website. But this will always prompt you to accept/refuse cookies when revisiting our site.

We fully respect if you want to refuse cookies but to avoid asking you again and again kindly allow us to store a cookie for that. You are free to opt out any time or opt in for other cookies to get a better experience. If you refuse cookies we will remove all set cookies in our domain.

We provide you with a list of stored cookies on your computer in our domain so you can check what we stored. Due to security reasons we are not able to show or modify cookies from other domains. You can check these in your browser security settings.

These cookies collect information that is used either in aggregate form to help us understand how our website is being used or how effective our marketing campaigns are, or to help us customize our website and application for you in order to enhance your experience.

If you do not want that we track your visit to our site you can disable tracking in your browser here:

We also use different external services like Google Webfonts, Google Maps, and external Video providers. Since these providers may collect personal data like your IP address we allow you to block them here. Please be aware that this might heavily reduce the functionality and appearance of our site. Changes will take effect once you reload the page.

The following cookies are also needed - You can choose if you want to allow them: